Huntly Hairst has been hosting the World Stovies Championships for the past 7 years as part of the North East food and drink culture. Contestants come from far and wide to present their version of Stovies in competition for the Championship title. This year we want to highlight the total eating experience of Stovies, so will be introducing both Pickled Beetroot and Oatcakes into our food competitions. People in the past have made exotic twists on the Stovies recipe but we have gone back to basics and ask contestants to give us their Traditional Stovies only. This still allows for a great deal of scope, should they include meat and potatoes? Which vegetables are right for Stovies? Should the burnt bit from the bottom of the pan be regarded as a plus or a minus? Which meat makes the best Stovies?

Come to Huntly Golf Club on Hairst Day to see all the Stovies entries and sample the delights of Stovies made by a local chef.

The Recipe of a Champion

In 2014 the multi-award winning writer and passionate hobby chef Stuart MacBride won the Stovies Championships (most people might know him better for his books). In a 2018 Interview with the Press & Journal Stuart is quoted as saying:

“I was crowned World Stovies Champion in 2014 at a competition in Huntly. Not to sound bigheaded but I’ve won a couple of things over the years from the writing, but the only trophy on my desk is the Stovies Champion one. It’s the tiniest plastic cup but has started more fights than I’ve ever had in my life. Everyone thinks their granny makes the best stovies – but do they have a trophy to prove it?”

He kindly makes the winning stovies recipe available on his website. 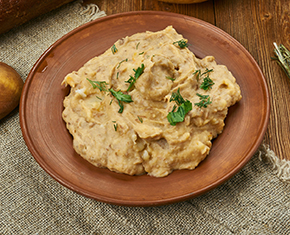 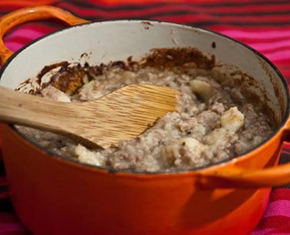 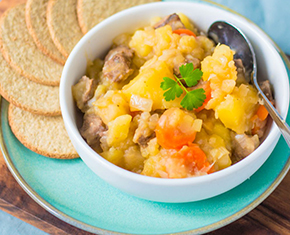